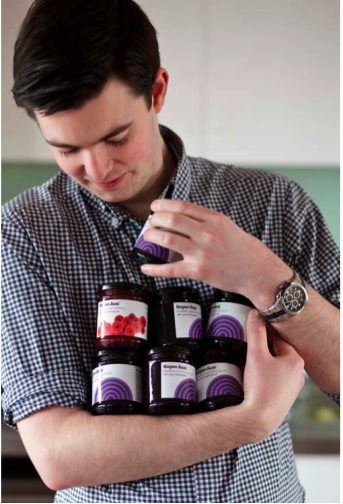 SuperJam is one of those few brands born from humble beginnings that has gone on to score super fans across the world for the quality and care taken in every product. Fraser Doherty, Scottish born inventor, began his startup journey at a very young age and since then, what started as some fun in a kitchen, has turned into an award winning, commercial success just six years later.

“SuperJam produces a range of 100% fruit jams and sells them through a couple of thousand stores around the world.” Fraser says, “As well as making delicious products, we invest some of our profits in doing good. When I was fourteen, I was visiting my grandmother and she was making jam in her kitchen in Glasgow.  After she shared her recipes with me, I started making jam myself – selling it on a tiny scale to the neighbours.  I came up with a way of making jam 100% from fruit after so many people told me that they didn’t eat jam because it normally contains as much as 70% sugar.”

Fraser saw this as a massive problem he wanted to solve. He wanted to create a healthier jam option that supported local suppliers, sticking to traditional Scottish recipes, so that everyone could enjoy jam without the sugar overload. The jam he sold on a small scale to his neighbourhood soon became popular demand. Word got round and Fraser was suddenly selling thousands of pots of jam a week.

As his startup grew, he became inspired by the late Anita Roddick’s (founder of The Body Shop) approach to business; keeping it ethical. He followed suit by thinking about ways he could build a business that invested some of the profits back into doing good.

“When my Gran originally made jam, she’d also bake cakes and scones and visit the elderly people in her area for afternoon tea.  I figured it would be nice to do this on a big scale and so we have now run hundreds of free tea parties for elderly people.”

The SuperJam tea parties were born, providing entertainment, dancing, poets, and scones for elderly people who live alone or in care, giving them the opportunity to make friends, have some fun and feel a little less lonely. Now a registered charity, Fraser and the team have put on hundreds of free tea parties across the UK for elderly people. Visiting and caring for the elderly was something Fraser’s Gran felt very strongly about. He wanted to give something back to his Gran’s generation as well as give young volunteers the chance of interacting with older generations.

“Six years ago, SuperJam launched in Waitrose, making me the youngest ever supplier to a major supermarket.  We have since sold millions of jars, won dozens of awards and I’ve written a couple books – a recipe book called The SuperJam Cookbook and a business book called SuperBusiness.”

“Start small, find a mentor and most of all, don’t be afraid!”

Learn how you can build a happy, successful business from your passion. Download our FREE e-book & startup toolkit ››