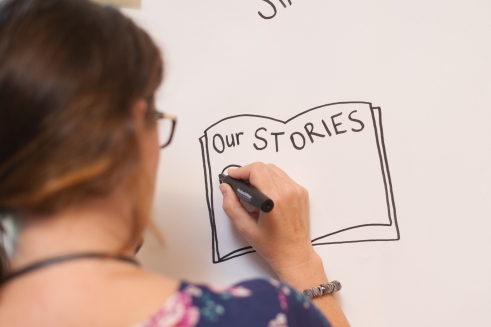 There’s a lot of confusion about what Branding means and why it’s so important to get it right.

▪ a relationship between you and the outside world

▪ an emotion sparked up when your company name is mentioned

▪ the emotional value you create

▪ a logo you bought on 99designs

▪ a luxury that startups can think about later (once they’ve done, you know, the important stuff)

▪ a load of nonsense

Key to this is your brand isn’t what you say it is. It’s what others say that matters.

Your brand needs to be authentic, purposeful & believable. Not a campaign created by a bunch of creatives that isn’t consistent with the way you behave.

More and more, branding is about being true to your company purpose and values. A magnet that attracts likeminded people and builds your tribe. People who will actually give a shit about your product or service, despite its flaws.

You put up with stuff from your friends & family because you trust them. That’s what a strong brand gives you too— love and loyalty. Something most businesses struggle to gain.

How are you going to make an impression and stand out from the crowd?

A starting point for a branding discussion should be for the founder(s) to effectively communicate why their startup exists (other than to make money), what kind of company they want to build, how they want people to feel when they come into contact with them and what values they hold dear that are driving this. I’ve found it’s always useful to know which companies or products are admired as a starting point and uncovering what it was about them that stood out.

One powerful question helps to frame the discussion:

“If in 10 years time your company ceased to exist, what would people miss?”

The longer this takes to answer, the more work involved.

If they haven’t thought about some of these things or don’t think they are important then it will be a longer road ahead. Great brands don’t happen by chance. In some cases an external eye (agency or consultant) can help in drawing out beliefs and traits from founders early on into something meaningful for the outside world. It’s about being confident in your actions and not focusing too much on the competition, but rather seeing value in playing your own game.

Having customers is important to get feedback from the market, but most people warm to human values such as authenticity, trust, honesty and individuality. If you can embody these in your interactions with them then you’re half way there.