The fourth instalment in our new series spotlighting Founders’ Stories. Once a week we’ll talk with an up and coming entrepreneur about their journey so far, sharing failures and successes they’ve learned along the way. **Hear from Bill at our next London speaker session**

Bill Griffin is founder of the platform Crowdwish, a ‘virtual genie’ app that makes users’ crowdsourced wishes and dreams come true everyday.  Don’t believe me? See for yourself.

When we first met with Bill, hearing his story, we saw firsthand how Crowdwish live and breathe the term ‘happy startup’. Bill is passionate about his purpose and making his users happy, and it’s refreshing to see a digital business purely giving back to it’s users, not just take, take, take like the attitude large corporates can get lost in. His story, and stories of wishes he and his team have actioned are so inspiring that we’re inviting Bill to share a much more in depth talk at one of our upcoming meetups in Central London. Sign up to hear when the date’s announced. Over to Bill to share a teaser on his journey so far…

Tell us a little about you and Crowdwish, how did the idea first come about?

I know this sounds completely ridiculous, but I wanted to create a site where people could come and ask for literally anything and get a meaningful and freshly generated response. That was the brief and it took my a while to figure on how to do it, a bit longer to design, then about six months to build.

Here’s how it works….

On Crowdwish, users can ask for up to ten wishes for anything they want – products, services, experiences, causes or advice. Anything. I know that sounds kind of implausible but bear with me. They can search the wishes already on the site and add their support to these existing wishes, or create their own new ones.

People gather support for their wishes through facebook, twitter or in any other way they choose; the more people ‘me-too’ their hopes, the more likely they are to become resolved. Every 24 hours the most popular wish on the site is taken on by our team of expert deal brokers, researchers and negotiators who then use the power of the combined demand to create results on behalf of that newly formed community.

That isn’t to say that wishes will be miraculously granted; more that the site will work tirelessly to make this aggregated demand as influential as it can be. This might involve creating discounts on popular products that have been selected, it might involve lobbying people who can help change something unfair, or it might be about creating unique experiences available nowhere else. Users don’t have to take advantage of whatever is offered, only if they think it’s right for them; but all solutions are tailored, creative, imaginative and effective.

So far 77 wishes have been ‘actioned’ – one a day since the site’s launch in January. A selection of these actions include:

• Making donations to charities such as the Red Cross, Action against Hunger, Save the Children and The Bill Clinton foundation.
• Writing spoof letters to Jeff Bezos and David Cameron
• Surprising NHS staff with various goodies
• Lobbying CEOs for equal pay
• Going to Sir David Attenborough’s house to ask for a cup of tea
• Having people meet with professionals – from photographers to personal assistants – to help them in their career development
• Providing discounts on Apple products
• Asking Michael Gove – directly – to teach a lesson himself
• Cheering up friends of users with surprise gifts
• Finding and allowing users to enjoy the world’s best pie

And masses more all featured every day on our blog…..

What’s your big dream of what it will one day become?

You’re meant to have an insanely ambitious goal, right? Well, here’s mine.

To join together the world’s hopes and ambitions, collate and quantify them, then use their critical mass to help bring those dreams closer to reality. 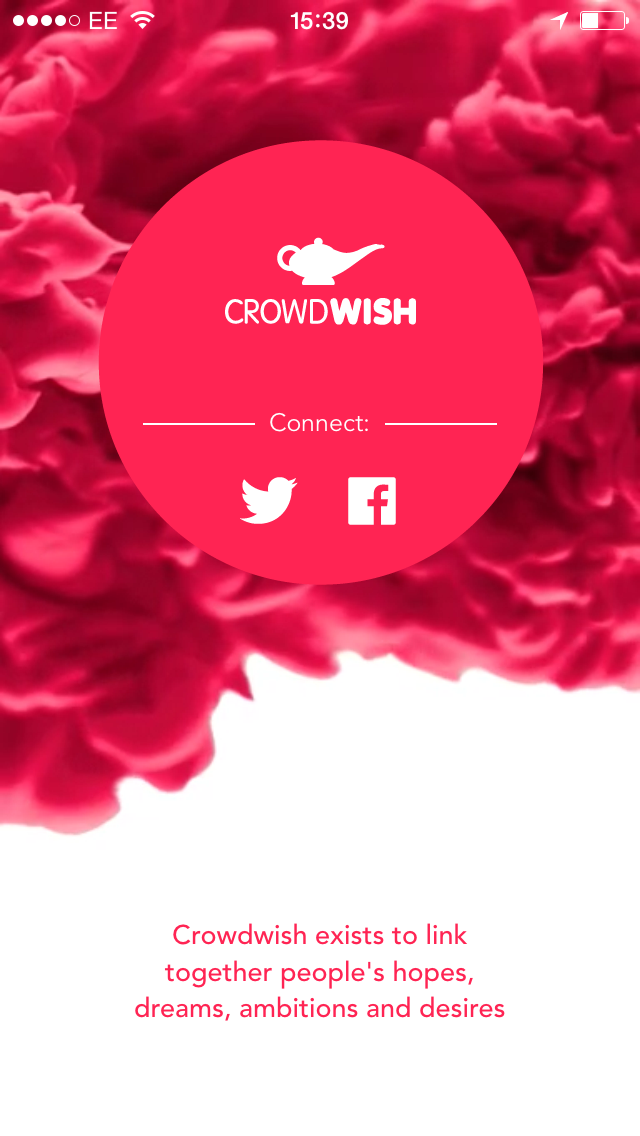 Crowdwish are due to release a mobile app in April 2014

What or who inspired you to get where you are today?

I like the real ‘f*ck you’ entrepreneurs….Brian Chesky at Airbnb, Ev Williams at Medium/Twitter, David Karp at Tumblr, Mahbod Moghadam and his co-founders at Rap Genius, Jamie Byng at Canongate Books, Peter Florence at the Hay-on-Wye literary festival, Nick Jones at Soho House…basically people who stop at nothing, don’t accept the conventional wisdom and are happy to uncompromisingly put their idea into the world, the way they want to do it. I am a huge believer that you have to do what you feel is right – as Paul Graham once said, you’re much better off building something 100 people love, rather than something 1,000 people think is ‘kind of okay’.

Any lessons learned or pivotal moments along the way?

We’ve made mistakes every day, but we never repeat them. Gratifyingly I’ve learnt that most people are unselfish, hugely grateful for help and fundamentally good. The response to the site has been amazing.

What one piece of advice do you have for budding entrepreneurs and changemakers?

No one really gives a toss about your idea; what smart people want to know is twofold: what have you done about making it a reality and what does your potential customer base seem to think about it? That’s all that really matters; ‘ideas’ per se are not a valuable commodity.

One Response to “The story of Crowdwish: an app that makes wishes come true everyday”